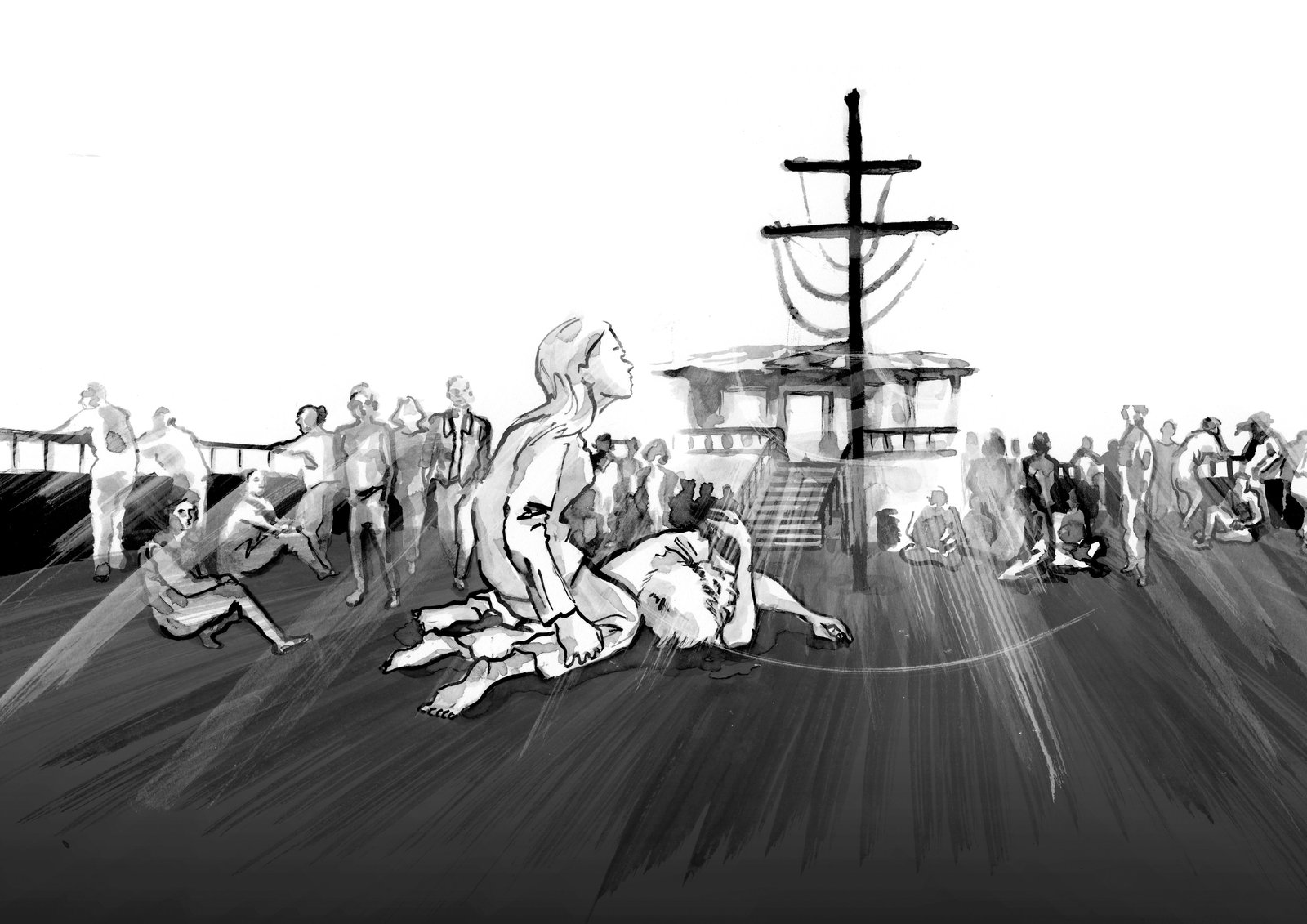 No. 12
In a web project on prisons, saving video for last
Measuring Impact: Just How Does Film Drive Change?

Yingchi Wei Yingchi Wei is a journalist with a background in television and video production. In December she graduated from the Media Innovation graduate program at Northeastern University's School of Journalism. Previously she was a program director of a popular television talk show in China, called Yang Lan One on One and an associate producer of New York Lounge in New York.

Driving rain appears to splash across your computer screen. A howling wind blows through clouds. Suddenly thunder crackles and your heart almost stops. A grey ocean almost devours a swaying boat. Now you are worried. Will it sink?

You can’t stop scrolling down to find out.

Last spring SBS Australia, Australia’s public broadcaster released its first version of what they describe as an interactive graphic novel. It is called The Boat, the title story in a book by Nam Le, a Vietnamese-born Australian writer. The story was chosen to mark the 40th anniversary of the fall of Saigon and the beginning of Vietnamese immigration to Australia. Le, the son of a “boat family” drew the story in part from his family’s own experiences. It tells the fictional story of Mai, a 16-year-old girl whose desperate parents decide to send her to Australia by boat to save her from the conflict.

We were interested in the form of graphic novels and what we could do with them using technology. It started there.

This innovative digital version of The Boat is the first time the SBS interactive team worked on a project this ambitious in scope. “We were interested in the form of graphic novels and what we could do with them using technology. It started there,” Kylie Boltin, the project’s producer, told Ochre.

The site quickly became one of the all-time most highly trafficked SBS projects. It picked up numerous prizes for illustration and interactive storytelling including Adobe’s The Cutting Edge Project of the Week.

The artful, sweeping piece with its haunting music, suspense, agony of storms and relentlessness of seasickness is told through the rare convergence of Japanese Sumi-e ink style illustrations and WebGL animation and interaction.

“The comic combines multimedia – animation, sound design, archival footage, text and music – to be delivered through shiny, glassy screens with lights beaming at your eyes. The comic needed to feel warm, flawed and human, so I used primitive materials like bamboo calligraphy brushes, rice and cotton paper stocks, and Sumi-e inks. It made the comic much more direct and urgent,” Matt Huynh, a New York-based Vietnamese-Australian artist who illustrated The Boat, wrote in an email.

Media is streamed dynamically into the site, adapting to the users’ reading speed. Auto scrolling allows viewers to sit back and soak in the story. The images, the sound of water surging, people’s whisperings, the sounds of Vietnamese folk songs and their verses surrounded by painted peach-red flowers verses makes for an immersive and cinematic feel. The team also employed sparse integration of black-and-white photos of actual refugees, while archival imagery of a refugee camp contextualizes Mai’s voyage which viewers can access them as side stories. With the technique of parallax scrolling, where background images move slightly slower than foreground images, it enhances the illusion of depth in a 2D scene.

The team also employed sparse integration of black-and-white photos of actual refugees, while archival imagery of a refugee camp contextualizes Mai’s voyage which viewers can access them as side stories. With the technique of parallax scrolling, where background images move slightly slower than foreground images, it enhances the illusion of depth in a 2D scene.

As a viewer reads the text, slight atmospheric animation, such as light flickering only adds to the immersion of Mai’s situation. It utilizes various panel transitions, such as moment to moment, action to action and scene to scene, to simulate the reality and encourage viewers to continue experiencing the story.

A year in production, Huynh handcrafted over 200 pieces, capturing the people, events and landscape of that era in Vietnam. He said that it took almost 300 drafts of drawings before he grasped the way the characters should look -- their size, age, way of dress and even how they carried their weight.

Creating the boat itself he said was one of the hardest parts. “Drawing patterns and correlations with the boats eye to the characters and their movements and everything a lot of my comics have that musicality to it, when you see patterns emerge and you are able to connect a human character with an inanimate object and see themselves in it and see them both degrade, or, whatever it is. That’s how I built the boat,” Huynh said.

In turn, SBS’s multimedia team then animated and developed a site that initially presents as a conventional long-scroller but quickly surprises with immersive events tied to the story such as branching narrative paths that meander between flashbacks and folksongs to the torment of thirst and illness on board the boat. Helping intensify the emotional feel of the project is a web audio soundscape designed by Sam Petty, an Australian movie sound designer.

It may feel seamless, but the creating this sense of journey was not easy.

While the illustrator worked from his studio in Brooklyn, other members of the production team were across the globe in Australia. So most of the collaborations were done via Skype. They had an active spreadsheet between Boltin, the producer, Matt Smith, the interaction designer and developer, and Huynh, the illustrator. They exchanged interactive examples and comments.

We are breaking new ground with these interactive projects, specifically trying to create something new and innovative – there often is no road map. That can be daunting.

“There is always the stage, in ever project that you do where you question how it is going to work out. We are breaking new ground with these interactive projects, specifically trying to create something new and innovative – there often is no road map,” Boltin said.

For Huynh, accustomed to working alone as an illustrator, the challenge was more about collaborating with a team.

“Opening it up to this team of collaborators is a bit like attempting to write a novel with a team. Having collaborators made testing my artistic decisions much more rigorous. Decisions I once would have taken for granted would need to be explained. Decisions that I felt strongly about I would give the courteous reconsideration if someone saw differently,” he said.

“The full experience is spectacular on desktop, but also available on iPad and Android tablets, where the unique abilities of these devices are harnessed … going so far as incorporating force-feedback ‘rumbling’ on Android tablets as the waves of the ocean crash against the boat and its inhabitants,” said Boltin.

Surveying this visual version of his story, Le, the author of The Boat summed up its impact as “strange and powerful … it opens up new ground.”